Detected player will show up on the list with exclamation mark in left top corner.

You can filter out players with only detected possible modified skills on the list by pressing exclamation mark icon above the list:

There are three levels on detections: Only players with red examination mark can be reported. To do it, right click on player and choose option ‘Report’ from menu:

Reporting service is checking additional conditions to be sure that report doesn’t contain false positives. If report is accepted, you will get message:

If report doesn’t meet our conditions you will be informed too:

We want to keep website free from false positives so sometimes session might have not enough data to be sure that someone is cheating. Single incorrectly detected skills might happen occasionally. Also keep it mind that screenshots, videos can be easily faked. Please don’t bother with other sources of reports than website.

There are three new columns in Skills Rotation tab: 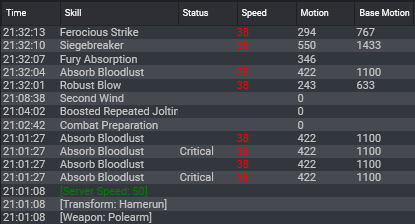 Server Speed tells you what ratio of Motion to Base Motion player should have (minimum) if he doesn’t have modified animation times. If program detects that skill’s Speed is lower than current player’s Server Speed (after applying some tolerance), it marks that skill as possible modified.